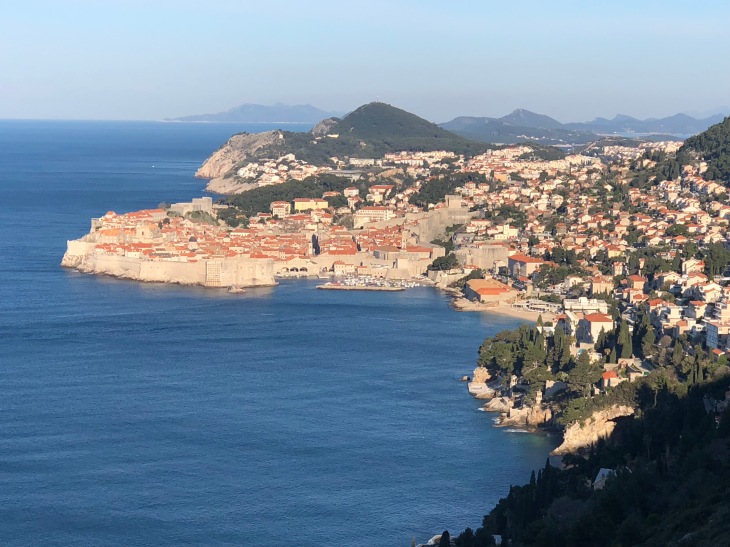 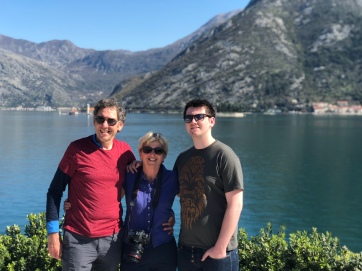 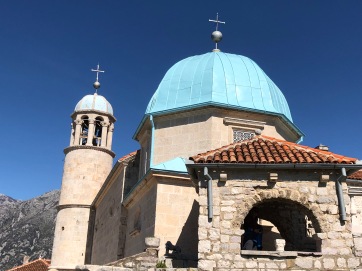 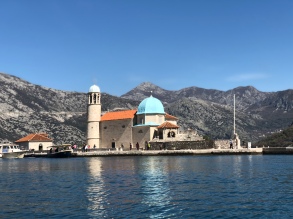 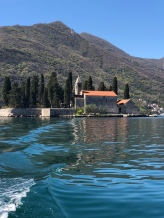 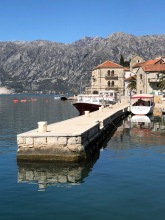 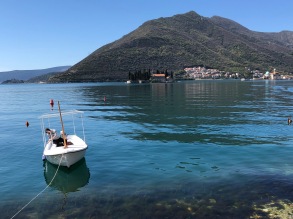 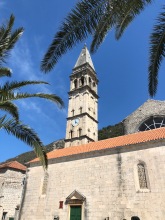 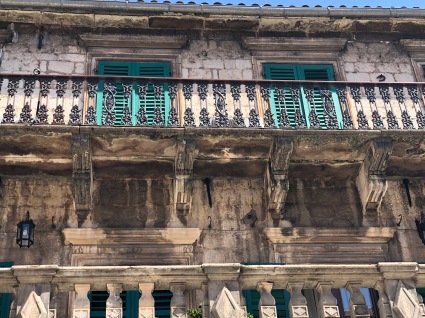 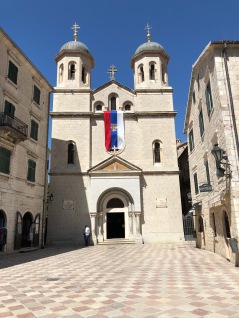 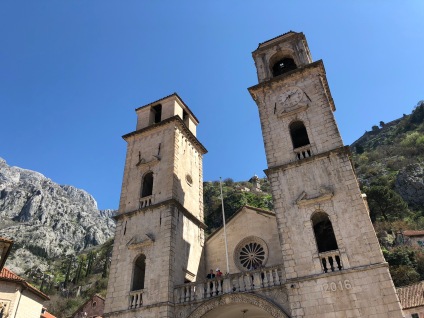 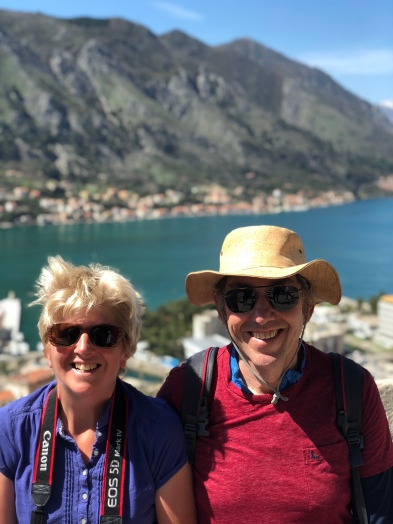 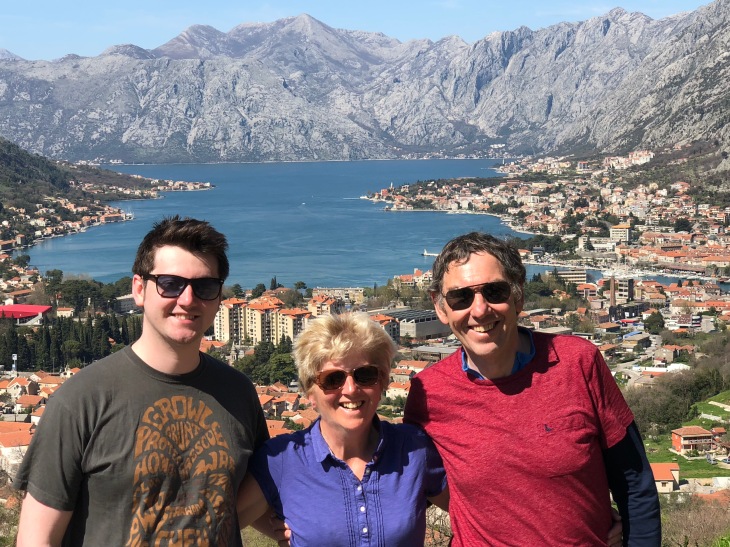 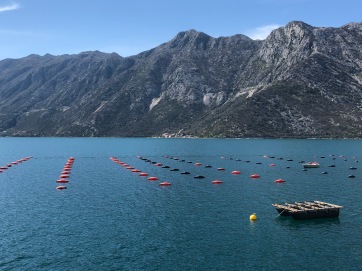 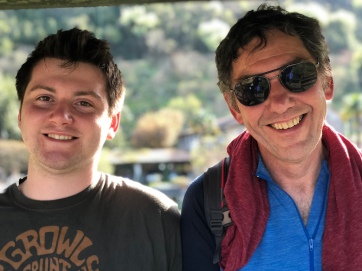 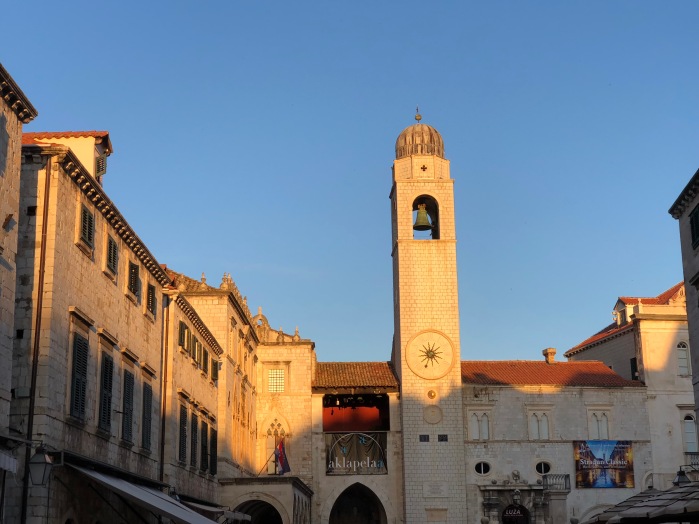 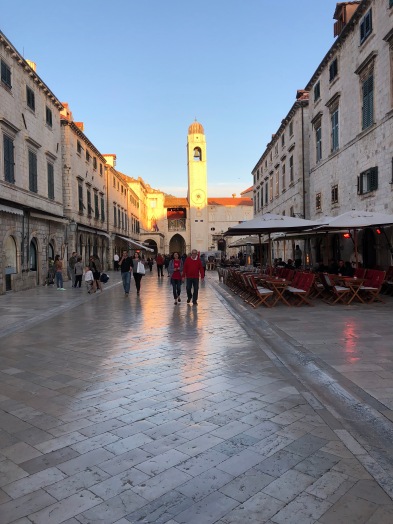 We have spent our last day with Edward in Montenegro. Wow! What an amazing country. The small part that we have seen has been exceptionally beautiful, and left us wanting to see more.
We set off early with our guide, Filip, stopping to look back over Dubrovnik Old Town before heading for the border. Like Bosnia yesterday, Montenegro is not part of the EU, unlike Croatia, so we first had to endure the painfully slow Border Police first check our passports on the Croatian side, and then on the Montenegrin side of the border. I must say, the Montenegrin guards won hands down in time and efficiency.
Once in Montenegro, we drove south towards the Bay of Kotor, which is in effect three huge interlinking bays surrounded by mountains which lead eventually to Kotor Old Town.
First, however, we wound our way along the spectacular coastline to a little town called Perast. The two main attractions in Perast are actually out in the bay – both islands. One is man-made, and called ‘Our Lady of the Rock’. The story goes that in 1452, the locals saw an image of the Madonna on a rock in the bay. Sailors, wanting to thank the Virgin Mary for their safe passage, started depositing more rocks on this site, slowly forming an island. In 1630, a church was erected on the rock, containing many Venetian paintings, since at that time Montenegro was ruled by the Venetians, who controlled all the coast of Croatia and Montenegro. Even today, every year on 22nd July, locals take boats over to the island and deposit more rocks in respect of the virgin Mary.
The other island is called St. George’s Island, and contains a Benedictine Monastery flanked by cypress trees.
We took a small boat trip out to the ‘Lady of the Rock’ to admire the beautiful church with it’s sky blue roof. It made me think of all my rowing chums, who today were taking part in the Perth to Wormit row. However, our boat ride involved considerably less exertion!
Once back on shore, we decanted to a local cafe looking out over the bay for a coffee, and to sample the local ‘Perast Cake’, made from almonds. Our guide tried to persuade us that it was very healthy, but personally, I have my doubts – it seemed pretty calorific to me.
We then headed on around the Bay, eventually arriving at Kotor. The settings for this spectacular medieval town is right at the far end of the bay, with towering mountains on three sides, and the azure blue water on the other. I must say, I was rather alarmed as we approached to see a huge great cruise ship docked right in front of the old town, completely towering over it’s surroundings. It was so out of place and out of scale, and my heart sank. But fortunately, not long after arriving, there were several loud toots on the horn, and the thousands of visitors flocked back onto their floating hotel, and were away. Since I have several friends who love cruising, I shall keep my opinions to myself, save to say, I was very relieved when the hoards left!
We met up with a charming local guide, who showed us round her town. I must say, Kotor, in my opinion, is easily en par with Dubrovnik. It has the medieval architecture, charm and beauty, without the commercialism of Dubrovnik – although as it becomes more popular on the cruise ship circuit, I’m not sure for how much longer that will be the case. The town dates back to the Middle Ages, and is fortified by zig-zagging defence walls up the hillside. Much of it’s architecture though is influenced by the period of Venetian rule. The entrance to the town is through the Sea Gate, from the time when water came all the way up to the Old Town’s boundary, and displays the winged lion of St. Mark, symbolising the Venetian influence. The town is a maze of winding streets, churches, museums, Venetian palaces and beautiful little squares dotted with cafes. Looking up in the narrow passageways, many of the buildings have intricate wrought iron balconies, and the whole experience is like you are walking back in time. In the main square sits St.Tryphan’s cathedral, with it’s characteristic two bells towers. Much of the wealth of this town came from sea-faring, since many of the most prosperous families were connected with sea-captains or ship building.
After our tour, we were left to our own devices, and we climbed the steep path up alongside the city walls to reveal a spectacular vista over the Old Town, and to watch the huge cruise ship disappear out of the bay.
We then started to re-trace our steps back along the Bay of Kotor, passing many mussel and oyster farms en route. Our stop for a late lunch was at a beautiful old water mill beside the water. Howard, of course, tried the local mussels, which he reports were splendid. By the time we arrived back in Dubrovnik, the sun was low in the sky, sending a gorgeous mellow glow on the limestone buildings of the city.
It had been a brilliant day. Montenegro is a stunningly beautiful country, and we all agreed that it is somewhere we would like to return to. For now though, it is Edward’s last night in Croatia, and tomorrow it will be back to just the two of us. What will we do will all this space?!!!