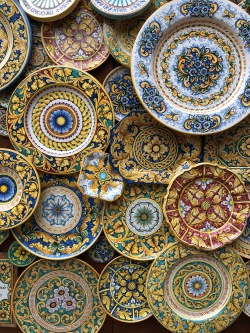 It was a rainy and blustery night last night, and despite parking Oscar in a sheltered spot between two trees, the topper was flapping most of the night. As a result, neither of us got much sleep. Howard did get out in the night to check the fixings, which seemed intact, but I still couldn’t get back to sleep. Ever since the Hurricane in the South East in October 1986, when our kitchen chimney fell through the roof, and we lost most of our ridge tiles, I have never been able to sleep in high winds.
We slept in late, dozing and listening to the rain. Howard heroically decided that he would still run, but I was suffering with a slight cold, so made the most of an extra lie-in.
We had hoped to go walking or cycling today, since this area of Sicily has a beautiful rugged coastline, and two small National Parks on this peninsula. Our campsite is very popular with climbers, since there are some stunning rock climbs up the granite cliffs just behind the campsite. But all the best plans etc etc. It was still teaming with rain after we had finished breakfast, so in the end decide to go for a drive, rather than sit in the van doing nothing.
We headed for the medieval hill town of Erice. In the summer, it is a very popular tourist destination, but today in the drizzle, we had it virtually to ourselves. My guidebook says, ‘Erice is easily Sicily’s most atmospheric village, a magnificent mountaintop settlement, … with stupendous views as far as Etna and Tunisia, and narrow medieval streets that are a pleasure to explore’. Well only some of that applied – since today Erice was in a cloud! The town sits on the top of a rocky outcrop, 2,463 feet above the Western Mediterranean, just above Trapani. The road leading up is narrow and tortuous, with endless hairpin bends, with precipitous drops to the side. Consequently, they have built a cable car to take visitors up to the mountain-top eerie from Trapani. But obviously, that would have been way too easy – so we drove. I must say that Oscar did remarkably well with all the hairpins, much better in fact than my ears, which wouldn’t stop popping.
We parked up outside the old city gate, and set off on foot. The mist was so thick when we arrived, it was just like walking in a cloud, and certainly none of the magnificent vistas were on view today. It was, however, just as the guidebook has suggested, very atmospheric. The town has been a hilltop fortress since Phoenician times, then was inhabited by the Greeks, the Romans, and then the Normans. The town is mentioned by the Greek writer Virgil in his ‘Aeneid’. Subsequently the Norman ruler Roger I built an impressive castle, the Castello di Venere over the remains of a temple to Venus. Despite it’s small size, Erice boasts 60 odd churches, and a popular visit is up the bell tower or Campanile of the Duomo, to see the impressive views. Today, we gave that a miss, since there would have been no view at all – we even struggled to find the huge Norman castle in the haze! Despite the weather, it was a real treat to wander the labyrinth of narrow cobbled streets, and stick our heads in to many of the little craft shops selling ceramics. The big attraction for Erice though are the almond cakes! This town is famous for it’s pastries, particularly the ones made from almonds – dolci ericeni, which often involve marzipan, candied fruits and buttermilk curd. The recipes were developed by an orphan, Maria Grammatico, sent to live in the orphanage run by the monastery in Erice. The nuns taught her their recipes, and when she left the monastery, she set up the patisserie that still bears her name. Needless to say, Howard and I bought a selection to have with our cup of tea.
On the way back to our campsite, we paid a brief visit to the seaside town of San Vito Lo Capo. It is a pleasant enough place, with a long sandy beach, and clearly busy in the summer. On arriving back at or campsite we sat down to enjoy our pastries and a cup of tea, when out of the window I spy a Sicilian man leading his donkey through the campsite. At most of the camper vans, he appeared to receive a donation of carrots for the donkey, and at the German van opposite us, a large glass of wine for himself too. Most odd! I’m feeling quite guilty now, that we didn’t contribute to this strange donkey tradition. I may search out a spare carrot in case he comes by tomorrow – I don’t want the other campers thinking the Brits don’t love donkeys!