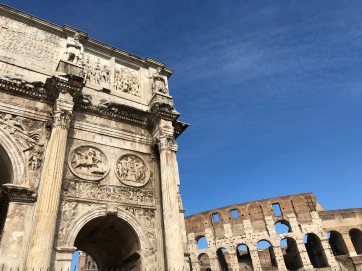 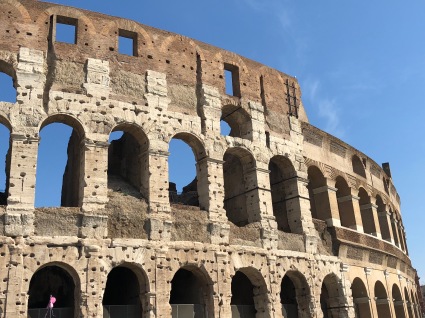 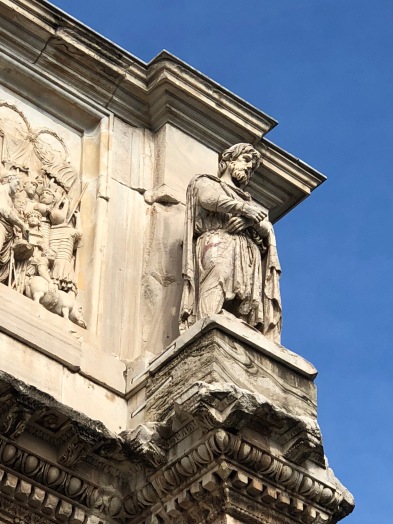 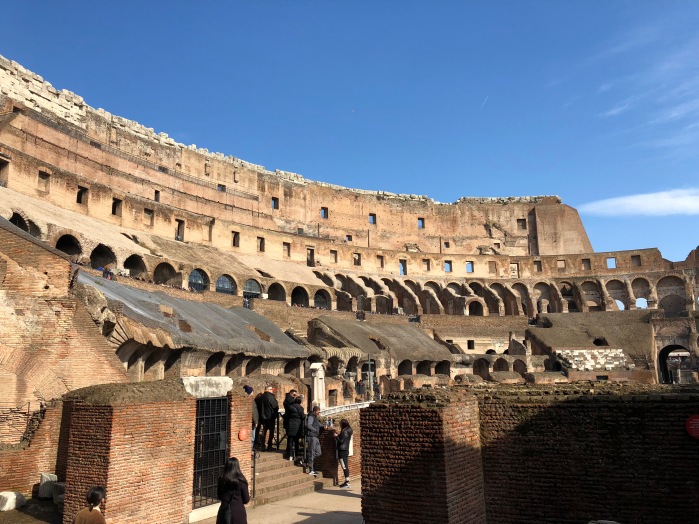 We arrived in Italy last night to snow and ice, and sub-zero temperatures – not quite what we had been expecting. The cold blast from the north that is currently hitting the UK has also got as far as Rome. Whilst logged into the WiFi on the ferry, I caught an article on the BBC news saying that significant snow had fallen in Rome overnight, the worst for 17 years, and that they were playing snowballs in the Vatican City. The article came with a photo of the Colosseum covered in the white stuff.
So as we drove off the ferry in Civitavecchia, we were relieved that we were booked into a Bed and Breakfast near the port for the night, since by now it was dark, and there was significant snow piled up at the sides of the road. After finding our accommodation, we walked, or rather slid the two hundred yards down the road to the nearest restaurant – very simple, but tasty food, with a charming chef who came out to talk to us. No doubt he was bored, as we were the only ones who had ventured out to eat in his Trattoria in the snow. Walking back to our B & B, the temperature was minus ten degrees, and despite being wrapped up in more clothes than we had worn on the NC500, we were absolutely frozen. As a result, we had a quick change of plan. Originally, we had booked to spend tonight and tomorrow night in a campsite on the outskirts of Rome, and catch a bus into the city. But even Howard declared that it was much too cold to camp, so we gave in and booked a hotel instead.
The only problem with this plan, of course, is that we now had to drive into Rome this morning. The one good thing about roads leading to Rome is that they are very straight. But that is their only positive feature. The drive in was terrifying! At one point I found myself whimpering, and looking down into my lap, unable to bear to look at the road anymore. Poor Howard managed to keep his cool, but by the time we eventually arrived at the hotel, both of us were completely frazzled. To say that the Romans are aggressive drivers would be an understatement. They take no prisoners at all! It’s every man for himself and there is not an ounce of courtesy. They make Dundee drivers look like forgiving nuns!
Having regained our composition and checked in – we set off to explore the city. The sun was still shining this morning, despite still being bitterly cold, but we were aware that the weather forecast for the next few days was poor, so thought we should grab the opportunity to see as much as we could. We caught a city bus, and alighted by the Colosseum – what an amazing sight! Howard had been to Rome before on business, but this was my first time, and I was duly impressed. Our plan had been to grab a coffee, but seeing long queues, we thought it prudent to check out tickets first, and then have some refreshment. The queues were indeed long, about two hours long to be exact – but we were approached by a tour guide who offered to get us in straight away, for a very modest commission. So that is how we ended up following a very eccentric and funny Italian called Roberto around the Colosseum, along with a small group of other Brits. It is something which usually we would have avoided at all costs, but in fact, it worked out incredibly well – and we thoroughly enjoyed his commentary. What we hadn’t really clocked though, was that there was a second part to the tour, to the Palatine Hill and the Forum. By now, my attention span was fading, and to be frank, my bladder fit to burst – so it was with some relief (literally) that the tour came to an end, and we were left to our own devices, and take in the rest of the site on our own. It was quite amazing walking around on the very slabs that the Romans had walked all those centuries before, and almost too much to take in on such a short visit. We had seen the best of the weather, and once the sun went in, there was a real bite to the wind. We grabbed a quick coffee to warm up, and then headed back to our warm hotel. I was gob-smacked how many people you can fit on a bus in Rome – it was sardines all the way home!
My first impressions of Rome are mixed. I am in awe of the wonderful Roman remains we have seen, but slightly disappointed in the city itself. It is busy and a bit grimy, with lots of graffiti in evidence, and seems to lack the civic pride I have seen previously in other Italian cities such as Florence and Venice. But tomorrow is another day, and we plan to visit the Vatican City. Maybe my opinion of the eternal city will change once I have had a good night’s sleep, and recovered from the trauma of the drive in this morning!

5 thoughts on “Day 49 Civitavecchia to Rome”