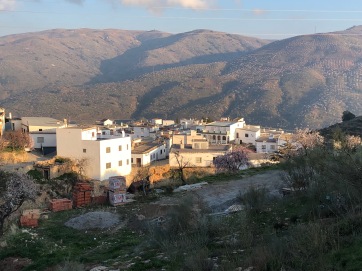 Last night we resorted to being tourists, and whilst looking for somewhere to eat for supper, came across a restaurant offering a free Flamenco show. The Spanish host ushered us into his establishment, and we were hooked. The meal was underwhelming, but worth every penny for what was to follow. We had been expecting female Flamenco dancers, but no. Instead three guys – one guitarist, with looks similar to Craig David and an excellent musician. No problem with him. A male Flamenco dancer, tall, dark and swarthy, but undoubtedly an accomplished dancer, if a little dramatic. But the third, the singer, an older male, pot-bellied, resembllng John Prescott, was a concern! Granted he could sing, but the second the show started, and he started clapping along to the music, he broke out into a profuse sweat. Howard and I both looked alarmed – and both thought the same thing simultaneously – that my CPR skills were going to be needed. It was an uncomfortable hour, as this guy became redder and sweatier, as he show gained more and more energy. Towards the end, I could barely watch. The climax was extraordinary, a frenetic display, as the fat unfit guy started dancing on stage with the lithe toned dancer. Please stop, I cried to myself, before you do yourself an injury. Plus I’m no longer registered to do CPR. Eventually it finished. The Spanish gave a standing ovation, and the Brits slid quietly out the door. We recovered from our experience back at the hotel with a lovely ‘five notes of love’ dessert and a drink!

Today was our last morning in Cordoba, and I must say, I have a very warm feeling towards the place. The old part of the city within the confines of the Mezquita walls permeates history, and I was taken by the fact that the old Jewish quarter sits side by side by the Muslim quarter. A fine example of multi-faith tolerance from a millennium ago if ever there was one.
After a wild goose chase for a dongle that is lost somewhere in the depths of the Spanish postal service (Royal Mail did their part, and had it at Heathrow within 12 hours!), we turned south east towards Granada. Originally we had hoped to spend a couple of days there, and explore the Alhambra, but the vagaries of the ticket booking service had conspired to defeat us. The Alhambra is the premier tourist attraction in Spain, and so it is advisable to book tickets at least two weeks in advance. Not knowing this, we had only tried last weekend, when actually there were still some available. However, the online booking failed to accept our passport numbers as ID, and the phone line was closed at weekends and on Mondays. So by the time we were able to ask for assistance, they had all sold out. We were also starting to feel a bit tired of cities, and so in the end, changed our campsite booking to the heart of the Sierra Nevada.
En route, we had to drive through Granada, so we decided to hang a left and check it out. We did manage to walk inside the free bit of the Alhambra, and Howard spent a little time in the museum. I’m quite sure it is stunning inside the main complex, but the streams of coach parties, school parties and large groups of people following guides with flags on sticks did rather put me off. Apparently they take 6,600 visitors every day, and every day is sold out. It is so much more commercial and larger than either the Mezquita in Cordoba, or the Alcazar in Seville, that I’m sure to do it justice, you need to spend a whole day there, and arrive early before the hoards.
The views of the Sierra Nevada mountains from Granada, however, are stunning. The snow clad mountains dominated the city, and seem totally incongruous in the blazing heat. We took a wrong turn on the way out of the Alhambra, and found ourselves on a track leading up to a nature reserve above the city, with even more spectacular views of the mountains.
We spent the rest of the afternoon winding our way up through the Sierra to our white Andalucian hill village of Trevelez. The drive was stunning, if a little scary in places. Mile after mile of steep hairpins, getting higher and higher into the mountains. A couple of times we stopped to admire the views, and to look at whole mountainsides terraced with almond trees, the pink and white blossom painting wonderful patterns on the hillside. It was gone six by the time we arrived at the campsite and the sun was just sinking below the mountains, leaving a pink glow in the scarce clouds. As we leapt out of Oscar to check in at reception the temperature difference was palpable – we had left searing heat in Granada, and now we were looking at snow on the hilltops around us. Our campsite sits at 1,515 metres. It will be a cold night!

One thought on “Day 40 Cordoba to Trevelez, Sierra Nevada”