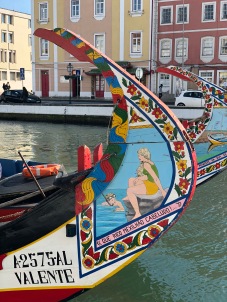 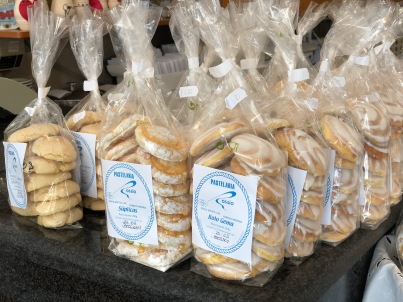 This morning we overslept! One of the problems with having both internal and external toppers on our van is that it makes the ‘upstairs’ very dark. Although they undoubtedly keep the van nice and snug, and reduce condensation, we are just not used to sleeping in the pitch dark. At home, we seldom pull the curtains, mainly because we love waking up to the view of the river. So generally, except in the depths of the winter, at home in Scotland the light of dawn wakes us up. But we have noticed that on this trip, we are starting to sleep in later and later. Clearly my purchase of an uber expensive upper mattress topper has also contributed to our comfort. Howard even suggested this morning that we will need to start setting the alarm, heaven forbid!
Anyway, once up and breakfasted, we considered our options. We decided to continue down the coast a little way to a town called Aveiro, muted to be the ‘Venice of Portugal’, due to it’s network of canals, high prowed boats and humpbacked bridges. It sits on the Ria, a shallow coastal lagoon, renowned for it’s bird life, and our guide book promised a lively waterfront and boat trips. Rather missing our weekly fix of skiff rowing, we thought a ride on the canal might improve us.
The sun was shining as we arrived at the waterfront, and we were directed into our parking space by the local ‘direct you to your parking space man’ (unemployment is apparently low in Aveiro we were told later by our boatman, maybe due to this example of job creation). First, we enjoyed a pleasant coffee in one of waterside cafes.
The boats on the canals are called ‘moliceiros’, and were traditionally used for harvesting seaweed from the lagoon for fertilising the crops. With the demise of the local seaweed industry, once agrochemicals took its place, the boats were transformed into tourists attractions for the town. On each of the boats the bow and stern are colourfully decorated in pictures which seem to fall into three categories – traditional (fishing, nautical and the like), religious, and plain saucy, rather like rude postcards you might see at an English seaside resort. Quite strange! The local boatmen seem to be multilingual, and give an informative commentary about the local history as you wind your way along. These days the boats are powered by diesel engines, so it is not quite as romantic as riding a gondola in Venice, nor, if I am frank, not as picturesque. However, it passed a very pleasant hour and we both enjoyed it. We did notice, however, that whilst Howard and I were dressed just in fleeces, everyone else was huddled up in thick overcoats and wrapped their legs in blankets. Clearly the skiff rowing and living in Scotland has made us hardy souls!
Another town, another culinary speciality. Aveiro is famed for it’s Ovos Moles – a sweet egg yolk and sugar mix of confectionary. So we couldn’t leave without sampling some. I fear Howard and I will not be able to fit in Oscar soon, if we don’t stop eating cake!
We then meandered our way down the coast for a few miles further along the lagoon to our campsite for the night. The lagoon reminded us a bit of Chesil Beach, with the sheltered fresh water lagoon in it’s lee, and just a few hundred yards westwards, long stretches of sandy beaches being battered by huge waves and a fierce onshore wind that made it hard even to stand up. The coastal communities along this stretch seemed rather characterless. Row upon row of holiday houses, some painted in nautical blue and white stripes, but nearly all deserted. In fact, we hardly saw a soul all the way to the campsite.
The land all along this part of the coast is as flat as a pancake, and I must admit that Howard and I are starting to miss the mountains. We had planned to stay a day or two and do some cycling, but we are now considering venturing inland to one of the National Parks. Deserted seaside holiday villages aren’t really our bag, and neither of us are that partial to sand!