Made an early start and headed back down the A9. We had planned to stop off at Aviemore for breakfast, but snow was coming down so hard that we just plodded on, fearful that the weather was worsening.  Progress became easier 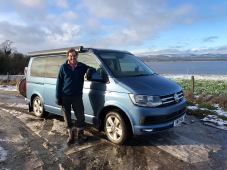 once the snow plough pulled out in front of us at Dalwinnie, and by the time we arrived in Perth the sun was shining. So arrived home safely, and have spent the rest of the day doing a quick turnaround on the washing, and trying to organise the van a bit better.

Now reflecting on lessons we have learned from our trial trip around the North Coast 500. The first thing has to be what an amazing country we live in! Despite the cold and adverse weather at times, the scenery has been absolutely spectacular, and everyone we have met has been warm and welcoming. We feel ashamed that this is the first time that we have explored this northern tip of Scotland, and I would thoroughly recommend the NC500 to anyone. I just hope that the rest of Europe can compare to the brilliant landscapes we have just experienced.

The second lesson is that we need to organise our kit better. Howard was constantly frustrated but stuff falling out the back of the van when he opened up the back – so this needs to be sorted out tomorrow. Our car WiFi has not worked particularly well, maybe because the phone signal up north has not been great, so we have only sporadically had internet access – hopefully this will improve as we travel south.

Oscar has stood up to the weather remarkably well. We were never cold inside the van. The internal and external toppers have done a good job of insulating the van and keeping the weather out. Even on the wild night up in Kinlochbervie, we felt snug by keeping the heater on low throughout the night. Driving in the snow was tricky, but at no time did we lose grip – I’m sure largely due to Howard’s driving. I completely chickened out at this point, only driving when we had long stretches of clear roads.

Travelling with the bikes on the back has been OK, although it does make it harder to access the stuff in the back. The rack is held on the towbar, and cleverly bends backwards to allow the boot to open up, but you have to know where things are to find them easily.

Howard and I are still talking to each other! Howard has been coping with my constant breaks to take photos by opting to go jogging every time we stop. This has meant that he has achieved his step count every day, even on days when we have spent a long time driving. I do think though, that anyone watching us would be thinking, ‘What on earth is that strange guy up to, running round in circles?’ More irritatingly, Howard has started taking some rather good photos on his iPhone – so I think there is some competitive photography going on here!! Spot his picture!

We’re travelling south on Friday, calling in on friends on the way, and also getting some solar panels fitted on there roof, to make us less reliant on hook-up whilst we are away. We start our real adventure next Friday 26th when we catch the ferry to Santander – so the blog will resume thereafter.