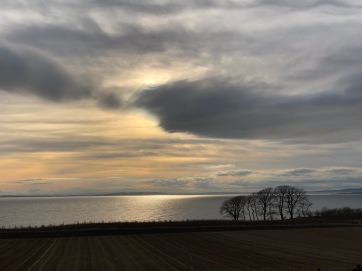 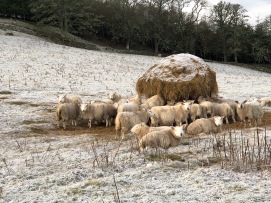 The day started well. It was a bright and frosty morning, and as the sun rose the coast of East Sutherland looked beautiful. We re-traced our steps a few miles to see the part of the coast that we had not seen properly in the gloom last night, since it had been dark just after 4pm the night before. However, we had been tempted back by the glimpses of water we had caught as we first crossed the Cromarty Firth, then the Dornoch Firth. We took a tiny single track coastal road that led us to Loch Fleet, it’s margins frozen forming interesting ice patterns. Ducks sat huddled on the frozen loch, and sheep stood in the frozen ground feeding from hay bundled into wooden troughs. We passed a sign that read ; Beware otters crossing for next mile and a half. We continued on to Dornoch Beach, and walked along the frosted sands as the sun slowly rose in the sky. Apart from a few dog walkers, it was almost deserted. Clearly one of the advantages of doing the NC500 in mid winter.

After a break for coffee, we then headed North along the North Sea coast, passing through Brora, Helmsdale and Dunbeath. The road we were on continued onto John O’ Groats, but by now we had lost the light, and the murky sea was looking rather unwelcoming, so instead we opted to cut off the corner, and head towards Thurso. We moved from East Sutherland into Caithness, and almost immediately we were confronted with miles and miles of heathland, interspersed with wind turbines.

The drive beyond Thurso became more interesting once we crossed back into Sutherland. The spectacular scenery slowly started to open out in front of us. In the distance the snow clad peaks of Ben Hope and Ben Loyal, and the Kyle of Tongue offered wonderful vistas. We stopped at Tongue for a walk and to weigh up our options. We had phoned ahead earlier in the morning to secure a hook up pitch at a campsite at Durness. However, the driving was slow, and we estimated it would be dark again before we arrived. We called in at the only Inn open in Tongue, and were briefly temped by the live music night on offer, only to discover that it didn’t start until March.  Ditto the hot food. So since the pub was deserted, and the barmaid assured us that Durness had a great pub with hot food on offer,  we continued on our way, taking in both sides of  the long Loch Eriboll. But as predicted, the light began to fade, making driving quite tricky on the single track road, and we were frustrated by dim glimpses of what would have been clearly stunning views. Howard drove, spurred on by the thought of a local craft beer and a tasty burger – yes, he had already chosen his menu. However, as we drove along the east shore of Loch Eriboll, the wind was starting to pick up, whisking the water high in the air, and as we eventually pulled into Durness in the pitch black, it was blowing a gale. We drove into the high exposed camping ground, the side of the van buffeting in the wind, and Howard could barely open the van door. The cover on the bikes was flapping precariously, and we decided to take stock. We would clearly be unable to put up the pop up roof in this wind, and the deserted campsite was looking very uninviting. We drove around looking for somewhere more sheltered to park, but the wind just seemed to increase even more. So feeling defeated, we phoned the Bunkhouse we had passed in the village, opting to shelter in the warm, rather than being martyrs to our van! Thankfully there was plenty of room, and to my delight, had an Alistair Sawday sticker on the door, having been recognised as a ‘special place to stay’. We had struck gold on a bleak night, and are currently tucked up in the warm lounge, whilst the storm rages outside. The only drawback being the rather loud German film being watched by a girl from Luxembourg on her laptop in the lounge. I suspect it will be an early night, otherwise Howard may commit murder!

So not quite the trial in the camper van, but at least we won’t be blown away tonight!