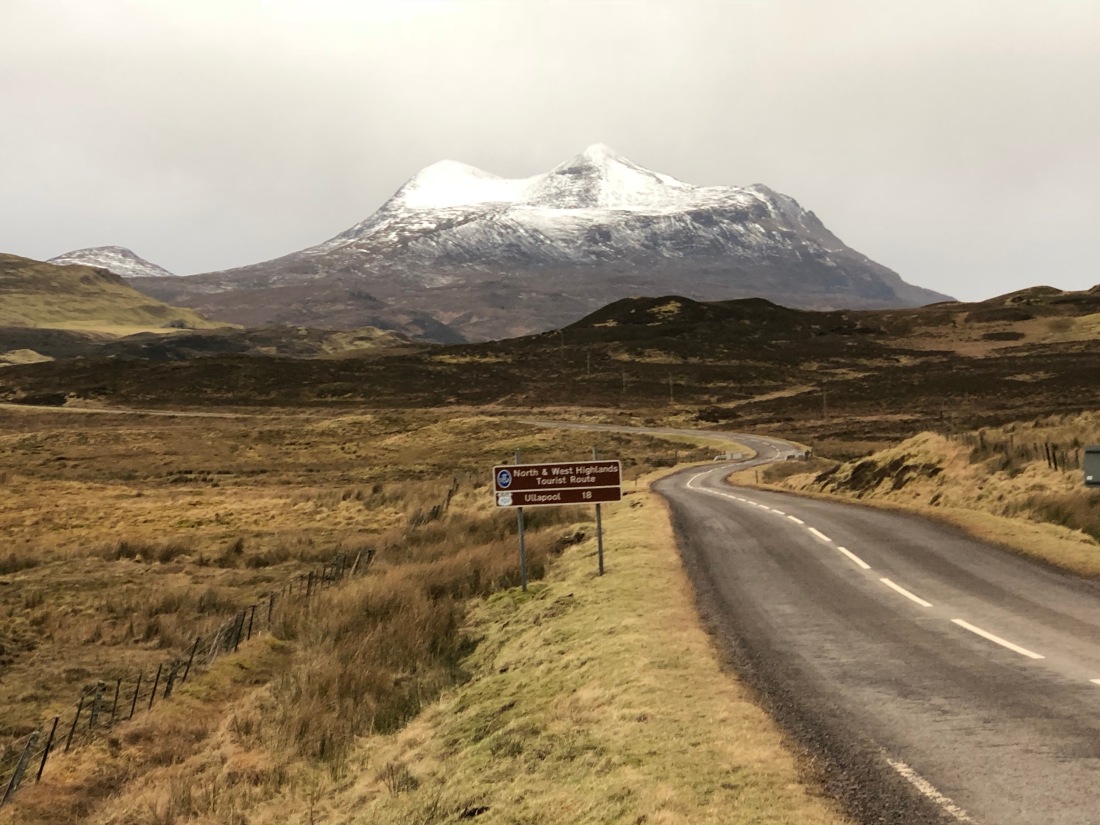 We had a restless night at Kinlochbervie – despite our sheltered spot in the Aire by the harbour. By about 3am the wind had really picked up, and the external topper started flapping frenetically. The combination of the waves on the shore and the wind made it sound more like we were in a lorry park on the M25! Eventually we lost our nerve, and Howard got up to check that the cover was intact. All was well thankfully, and we cat-napped until first light. The new mattress was comfortable, and the van cosy – so much so, that it was hard to get up at our designated time. We were greeted by the most wonderful dawn, but it took us so long to de-camp in the wind, that by the time everything was packed back in the van, we had missed the best of the sunrise.
We set off back along the single track road from Kinlochbervie towards the main road leading through North West Sutherland to Assynt. The scenery was absolutely stunning, with snow clad mountains and extraordinary rock formations. This part of the North West Highlands is designated as a ‘Geo-Park’ in respect of the amazing Gneiss rock formations. I cannot believe that having lived in Scotland for twenty years that this is the first time that we have ventured to this spectacular part of Scotland. We vowed to return again, and see it in different seasons. However, the narrow single-track roads did make us wonder what it would be like driving this road in the peak summer season. Despite frequent passing places, at this time of year, we virtually had the road to ourselves – and it occurred to us that it would be a complete pain to drive these roads when there was more traffic to contend with.
We continued on to Assynt. What can I say? Awesome does not give it merit. We were both totally blown away by the scenery magnificent mountains covered in snow, and as far as the eye could see, the most extraordinary rock formations. It was a geologists dream! We opted to take the coastal road around by Drumbeg and Clachtoll towards Lochinver. It proved very slow driving, and the weather slowly deteriorated. By the time we reached Clachtoll, we could hardly stand up in the wind. By the time we reached Lochinver, the rain had started, and the light was deteriorating.
We took a brief excursion along towards the Coigach peninsular but the view of Stach Pollaidh were mired by dull light and persistent rain, so we turned tail and headed towards Ullapool.
We passed by the Ardmair Point campsite, where we had spent a wonderful couple of nights last July, whilst competing in the Ullapool skiff regatta, but by now it was clear that camping out in these winds would be foolhardy. So we drove on to Ullapool, and booked in to the pub on the foreshore which had been so hospitable to the skiffies last summer. We parked Oscar head into the wind, to try to protect the bikes and bike cover, but as I speak, Howard is outside trying to secure it with more bungees – it looks to be a wild night! The forecast for the next two days is looking tricky – gale force winds and snow, so we will consider our options. This is, after all, supposed to be pleasurable, not an endurance exercise!! Watch this space!